Amateurs committed to self-production (i.e. Do-It-Yourself or, simply, DIY) are reshaping the relationship between production and consumption. The spreading of this trend suggests scenarios in which non-professional people are, or will be, able to create artefacts. The socio-cultural changes fostered by the development of open-source and digital technologies have introduced a significant shift towards the revival of making and crafting, thus fostering creativity, sustainability and customization. The boundaries of the working environment are now blurred and alternative manufacturing ‘places’ are introduced in the name of collaboration and social impact (see Fablabs, living labs, platform materials DEMADEI).

Over the last decades the process of industrialization and mass-consumption has seen an increased distance from actual production processes and a general deterioration of people’s making skills. However, to make is an option. From DIY clothing customization and electric bikes assembled in garages, through communities of hacker spaces and FabLabs, to public participation in science and policy development, the potential of making as a human capacity is widely acknowledged. This proliferation of making attitude poses new challenges to professional designers (Codesign Research Centre at KADK).

If it is true that we live in a society where “everybody designs”, designers should accept that they can no longer aspire to a monopoly on design and, at the same time, they have to be able to recognise what could be their new, and in my view […] important, specific role (Manzini, 2006).

What does it mean to design in a world characterized by a diffused creativity? What is the role and the identity of design (and designers) in relation to digital DIY emerging practices? How does the designer's role and professional expertie fit into this new landscape?

The user is not longer an informant but the source of inspiration for the design of innovative scenarios. Design maintains the leadership of the process thanks to its unique ability of imagining innovative solutions (envisioning) that stimulate the participation of entrepreneurs, users, analysts, business managers amongst others.

The main challenge for designers lies in the ability of facilitating participatory processes, in which such activities including listening, observation, inspiration, involvement and verification with users become essential ingredients of the project. The Design focus has now shifted from products traditionally intended to methods and tools enabling the participation of users in (especially digital based) DIY practices.

The Design Department of Politecnico di Milano, with the IDEActivity Center research group, has a transversal role within the fields of interest considered in the DiDIY project (i.e. Organization and Work, Education and Research, Creative Society, Legal Systems). The contribution of the Politecnico aims at the identification of a design and creativity based model that is able to generate innovation in the project areas, through the exploration of digital DIY as a mind-set and a social practice. We can consider it as a (production) process, with a strong social connotation, where people’s creativity and self-improvement through the development of new skills and knowledge are key-elements. Therefore the model will include the development of tools that facilitate the involvement of people in the design process.

Digital DIY, as stated before, is a complex phenomenon where people are directly involved in the research and production of knowledge, and therefore co-design methods and approach appear ideal to us for investigating and creating knowledge. Co-design is essentially characterized by the involvement of non-designers in activities, or collaborations, able to satisfy people's desires and aspirations. Collaboration between peers – involving researchers and laypeople - is a key element of the process. What needs to be investigated is what Gauntlett calls “the social meaning of creativity” in open innovation processes.

About the importance of common people, Times magazine elected “You” as the person of the year 2006: «It's about the many wresting power from the few and helping one another for nothing and how that will not only change the world, but also change the way the world changes». The process of finding ones own personhood as an independent and capable creator and maker is on the rise. The resurgence of DIY and craft industries “is a strong indicator that people are seeking ways to express their creativity” (Sanders and Stappers, 2012). 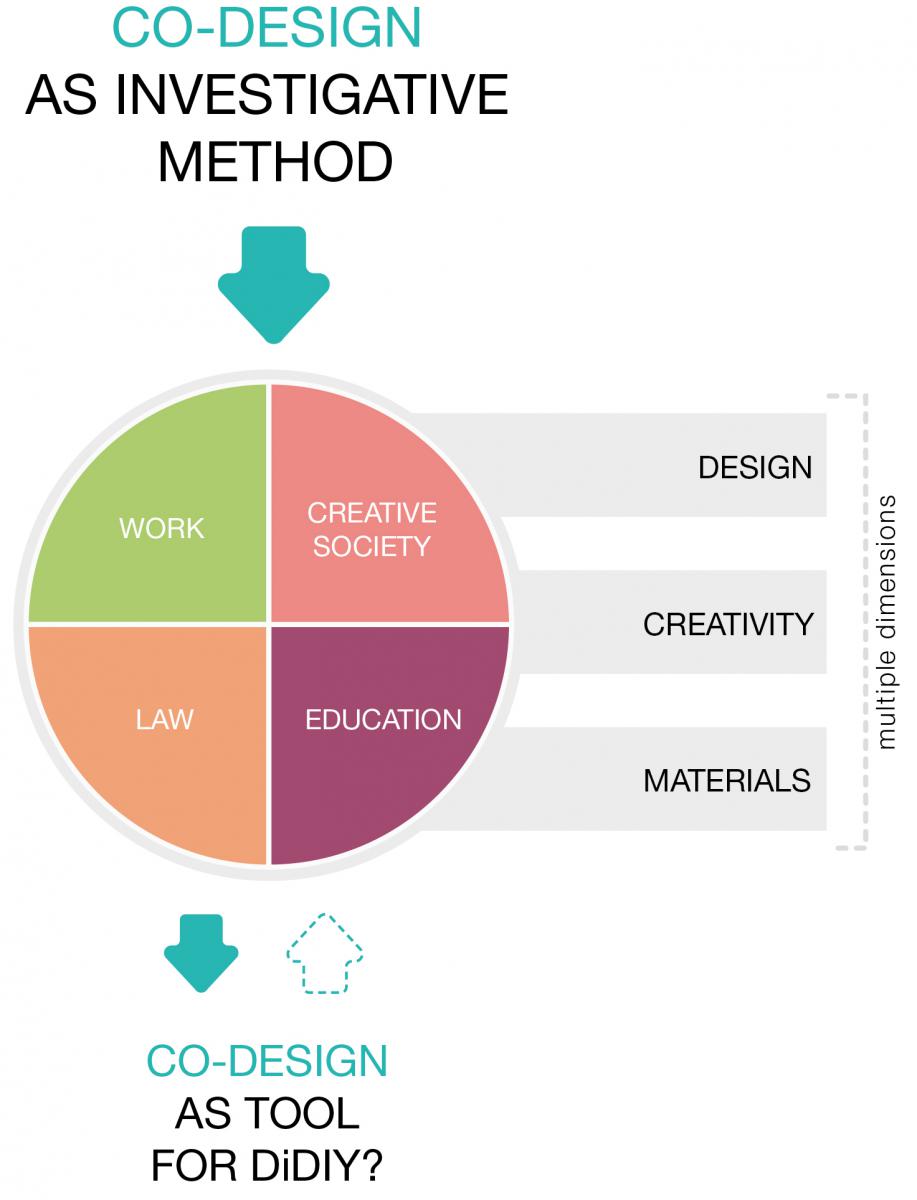 Co-design workshops, based on Human-Centred Design, will be used as investigative methods where existing and ad hoc tools will facilitate the involvement of people in the process. Furthermore we foresee the possibility of such approach to be adapted and used as an empowerment tool by people of different Digital DIY communities. Empowerment tool is here intended as something allowing people to ‘take control’ of their ideas in a participative and pro-active way instead of re-active one, in a system where self-improvement through the development of new skills and actionable knowledge is pivotal.

Will it be possible to understand how the use of digital tools together with participatory approaches is impacting the emerging forms of DIY in Creative Society, Organization and Work, Education and Research, Legal Systems?