Democratisation for the value DIDIY

Since the mid-2000s we have been witnessing the evolution and consolidation of a new phenomenon that involves makers around the world. The makers and DIYers were considered, until a few years ago, isolated amateurs intent on modifying standardised products for their personal needs or on building new ones on their own. On the contrary, for several years we have been witnessing the creation of spaces managed co-operatively and often self-financed, where there is available a wide range of instruments (such as 3D printers, or laser cutters, or 3D scanners) that would be inaccessible to individuals. The cost of buying a 3D printer or a laser cutter, if one is seeking tools with high levels of sophistication and final yield, are still so high as to be considered inaccessible to many.

The emergence of makerspace in the world is however revolutionising some fundamental paradigms, most of all the democratisation of technology. These are places where such technologies are made available to anyone with an idea to realise, a prototype to be refined, or simply with knowledge, time and inclination to devote to non-specialists in order to help them develop their own projects. 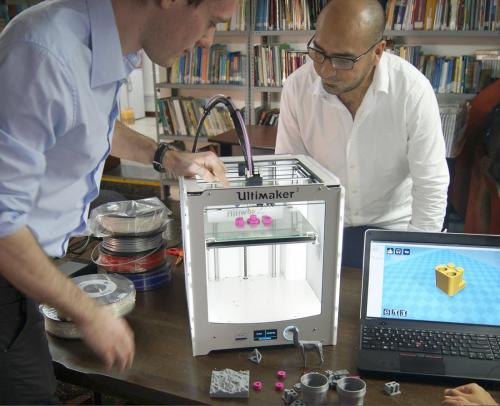 The democratisation of technologies is modifying other models, at an entrepeneurial level because these spaces allow one to develop prototypes and projects more quickly and economically by accelerating the activity start-up phase, containing costs, and modifying the value chain; at the level of innovation, because there has been a strong push for open and shared innovation that in this case also modifies the concept of production, if the economy has been based for 60 years on industrial and mass production, we are witnessing with moving of maker a return to artisan production, to the production of unique pieces and facts concerning the extent of the needs or of tastes of each individual.