Looking back: the Xerox 914 Copier 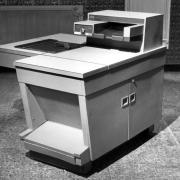 Many years later Fortune called the 914 "the most successful product ever marketed in America measured by return on investment." Part of its success was due to how it was sold. In 1966 the company came up with pricing policy instead of buying it one leased it for $95 a month for the first 2000 copies and 4 cents a copy after. This Licensing approach is still widespread in the industry today. Copies went from 20M mid 1950s to 9.5 billion 1964 and 14 billion 1966.

This was DIY technology, one did not need an expensive and time-consuming printer, with their expertise, but could produce copies directly (and hence access to this technology was strictly controlled within the USSR, for example). Marshall McLuhan said that, "Gutenberg had, in effect, made every man a reader. Today, Xerox and other forms of reprography tend to make every man a publisher"  (The Future of the Book (1972)

However, as it turned out, the photocopier (as it became known) did not herald a significant self-publishing revolution, but rather enabled organisations to decentralise, with each office keeping copies of documents they needed to refer to rather than all using a single archive. Rather it was only later when ink-jet technology was able to be connected to the output from a computer, so that content could be created, edited and shared electronically.