Welcome to the module on "Digital DIY and Creative Society" of the first "Introduction to DiDIY" course of the DiDIY Project! 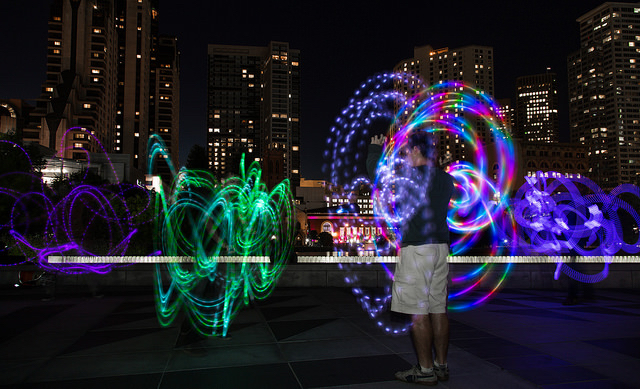 DiDIY is a creative activity because it is about the process of transforming ideas into outcomes. One aspect of creativity is the ability to generate something different, for example an original and innovative product.

Drawing on the "IDEActivity method" and in relation to DiDIY, creativity can be considered as the combination of three main theories and approaches. The IDEActivity method is defined as a learning activity aimed at introducing non-designers “to the main phases and peculiarities of the design process in a very short time”.

First, creativity is fuelled by creative thinking, i.e. the ability to face problems and find innovative and effective solutions, building on sound knowledge, yet adopting new perspectives. This involves the development of a - less than linear - process of information collection, selection, reconfiguration, and identification of the relationships generating new results (Testa 2011).

Second, creativity is the ability to recognise the usefulness of new configurations of existing elements (Poincaré 1908).

Third, creativity is an ability that everyone can potentially exercise - it is not the privilege of a few talented individuals. However, creativity needs support, encouragement and practice, or it can become suppressed. Creativity can be developed by learning to think in particular ways - open, diverse, experimental, willing to take risks and try things out - and through positive interactions with other creative people.

In Making is Connecting David Gauntlett describes individuals motivations for making as follows:

Gauntlett argues that creative activity is not just ‘a nice thing’ for the individual, but is absolutely crucial for a healthy and thriving society (See note 2).

DiDIY is about the convergence of physical ‘atoms’ and informational ‘bits’– where the world of hardware and physical things meets software and data – as well as the growing accessibility of related knowledge and data through open online communities. We call this ‘atoms-bits convergence’ – ABC – and talk about this meshing of tangible objects, machines, data and the internet as ABC technologies. It is these technologies which enable ‘digital do-it-yourself’ (DiDIY).

This ethos offers the potential to build stronger connections between hands-on creative practices with networks of thinking and shared open design processes. This DiDIY approach to learning and personal empowerment is becoming increasingly popular, bringing changes which at first seem to be about simply “how we make things”, but then later “how we do things”, in society.

DiDIY gives more people an opportunity to express their creativity

Whilst people have always been able to make things and tinker with technological tools, DiDIY opens up new scenarios and opportunities where very particular and complex things can be designed on screen and then produced as physical objects. Electronic systems equipped with sensors and motors can be easily developed to create new custom relationships between people and physical objects through the internet. 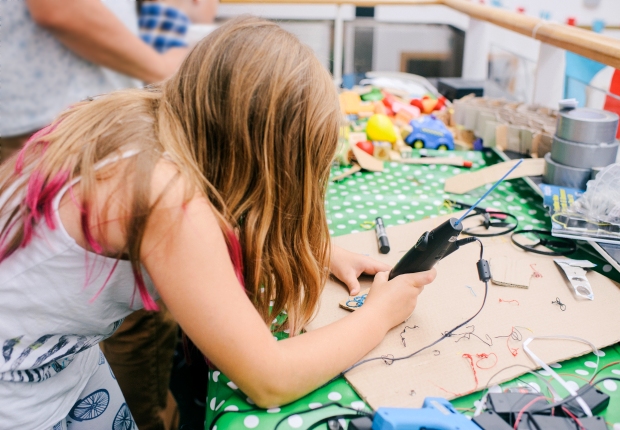 The internet connects people across national borders and enables creative individuals and groups to find inspiration from others who share their passions. With their DiDIY mindset they can work separately or together to design innovative and beautiful things. By scaffolding each others’ learning - building knowledge and skills up bit by bit, through supportive online exchange and conversation - they can reach new levels of creativity, imagination and opportunity.

There are many online community platforms that allow members to share, demonstrate and discuss their making projects. For example, one of the biggest is Instructables where you can see projects for a wide range of materials and skill levels. Ravelry is a community platform for knitters and weavers and has many thousands of pages of information, about patterns and yarns.

It has been argued that DiDIY builds on the principles of the Arts and Crafts movement, and other pre-digital thinkers, and could have a far reaching impact upon society by changing the orientation of citizens to their world in the shift from ‘sit back and be told’ learning and entertainment towards more of a ‘making and doing’ culture.

One indication of how the Maker Movement has grown is the rise in makerspaces and Maker Faires. A makerspace is a center or workspace where like minded people get together to make things.  A Maker Faire brings together all sorts of makers - hackers, crafters, coders and DIYers to share their projects and meet other makers. In the UK, for example, research has found that makerspaces have grown from a handful in 2010 to almost 100 by 2015, and many more are planned (see note 4).

The Maker Movement, and the general resurgence of craft and making, raise radical questions about the nature of the society in which we live. The cheap consumer goods which seemed to be the answer to 20th century desires are beginning to be seen as the cause of 21st century problems. At the same time, as everyday creativity leads to the recognition that “I can do this”, individuals are empowered to take more control over their own lives. DiDIY is a key dimension of the Maker Movement, which is beginning to transform how people think about consumerism.

Typically, makerspaces benefit from the creative collaborations made possible by bringing together makers and technicians from a broad range of experiences and expertise, who can support each other. Technical help can range from the structured support of inductions and specialist classes, to a more informal exchange of knowledge and skills. Furthermore, makers benefit from the embedded knowledge designed into software and hardware.

Other important sources of collaborative effort include the use of online digital designs and support networks. Social interaction in itself is known to be one of the major attractions of makerspaces. Socialising, making and learning were found to be the top three reasons for using makerspaces in the UK (see note 3).

DiDIY plays a role in building a creative society

Digital DIY practices and technologies have a broader impact on changes in everyday life, common culture, and communities. DiDIY is changing the world on an everyday and community level, including attitudes to consumption, sustainable solutions, and community networks. Through physical resource spaces, such as library makerspaces and fixing and mending centres, as well as online platforms where people can gain support and inspiration, DiDIY can play a leading role in developing a more creative society where the experimental and courageous ‘spirit of the maker’ is respected and celebrated.

How design can foster DiDIY creativity

Designers can contribute to the development of makers’ creativity. In fact, in a world where everyone does design, professional designers may have to find new roles to play. We envisage that they could lead, guide, provide scaffolds, or offer a clean slate to DiDIY practitioners, according to their level of interest and creativity (see note 6).

The contribution of designers will be significantly influenced by the scale of action (from local to global) and the typology of possible collaboration with DiDIYers. In fact, designers could help by:

The resulting scenarios (see note 7) express some of the possibilities for design contributions and opportunities. Designers can support digital DIYers either as collaborators or facilitators according to the creativity level. As collaborators, designers bring an equal contribution into a project shared with DiDIYer. As facilitators, designers support the development of the project drafted (or defined) by the DiDIYer.

You can choose the activities of your liking, although we recommend that you start by the first and follow the order. Please document each of the activities and publish them in the appropriate location, so peers can access and contribute feedback.