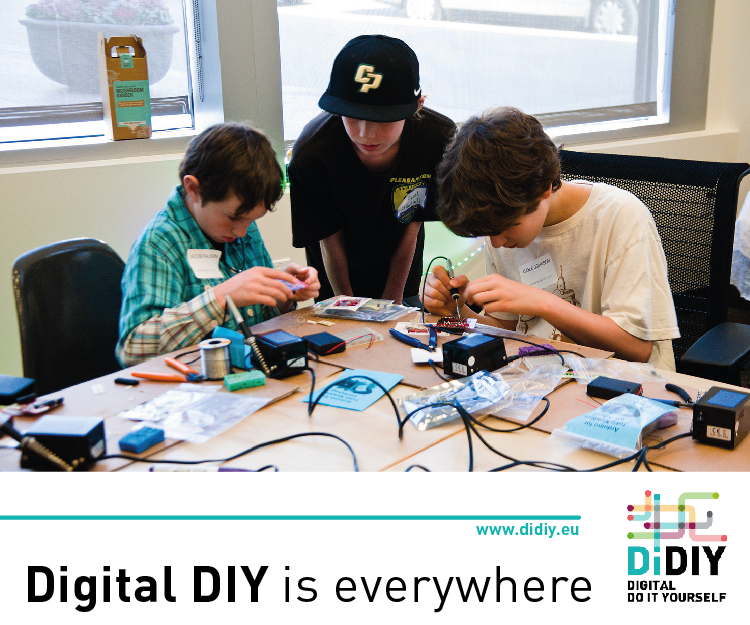 Digital Do-It-Yourself (DiDIY) may be defined as the ensemble of all those manufacturing activities (and mindsets) that are made possible by digital technologies. DiDIY is accessible to more and more people every year thanks to the availability of hardware tools and other machines that:

The concept of DiDIY is both wider, and deeper, than that of, for example, "making" and "makers". DiDIY does much more than give some people cheaper and faster ways to perform the same DIY activities they were already doing: DiDIY, instead, gives more people the opportunity to do things that they could have never done otherwise, like "sculpting" by controlling a 3D printer, versus using hammer and chisel with one's hands. DiDIY also gives people more opportunities to do things together, by freely exchanging designs and know-how through open online communities.

We say that DiDIY is everywhere because, like the software that makes it possible, DiDIY is extremely flexible. Any tool that is controllable by electric signals can be controlled by software. Software, in turn, can process designs and instructions of every conceivable sort. And the hardware to actually practice DiDIY become cheaper every year.

For all these reasons, DiDIY can, and in many cases has already started to, deeply change the roles and relations among individuals, organizations, and society, in all spheres of life, making new opportunities and threats emerge. From 2015 to 2017, the DiDIY Project studied all these scenarios and the corresponding long term implications for European society (*) and produced, for example, guidelines for EU educators and policy makers, about social adoption of DiDIY and DiDIY-related education processes and public policy-making.

Indeed, the DiDIY Project produced much more than those guidelines. However, for a quicker and easier understanding of true risks and opportunities of DiDIY, we suggest you to start from the links in the "Start here" and "Are you..." menus of this website. Last but not least...

(*) while the DiDIY Project as such formally ended in June 2017, all its partners still continue to research and promote DiDIY. To know more about their current DiDIY activities, and joining them, please contact the DiDIY Partners!