The goal of the DiDIY Project is to study the Digital Do-It-Yourself (Digital DIY or DiDIY) phenomenon, that is Do-It-Yourself design, manufacturing and usage of physical objects (but also music, and other non-material creative works) that is only possible thanks to computers, computer-controlled tools (e.g. 3D printers) and, often, open online platforms and communities such as < href="http://www.thingiverse.com/">Thingiverse, < href="https://www.wevolver.com/">Wevolver or < href="http://www.instructables.com/">Instructables.

Digital DIY creates new risks and opportunities in many areas, including the organization of work and businesses. For this reason, the DiDIY intends to study the level of knowledge and usage of Digital DIY in small and medium sized enterprises also in non high-tech sectors of the economy, starting with agriculture and crafts. 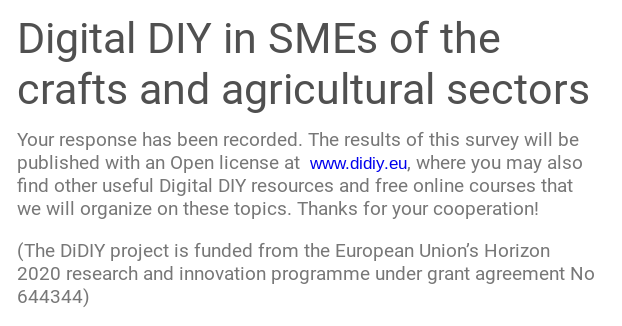 In this context, the DiDIY project has set up a SIMPLE, PILOT SURVEY, which is only meant as a first "field experiment" to help us prepare future surveys and data analysis procedures in the best possible way. But is an important experiment for us, and filling the survey only takes a few minutes, so... thank you in advance for filling the survey, and for spreading this invitation as much as you see fit!

The survey is aimed at Small and Medium Enterprises in the craft and agriculture sectors, based in countries officially defined, in May 2015, as "EU Member States, or Candidate Countries or Potential Candidates". The first version of the survey will be online until October 31st, 2015. After that date a second version will be published, and stay online until December.
The email address that you will be asked to enter in the form will be NOT shared with any other party and will be used only by the DiDIY project, to send you (if you request it!) further information about free training, research results and other activities of the project itself. All the other raw data collected with the survey may be published on the DiDIY website with an open license, as described in the general DiDIY Project licensing policy.
Tags:
survey
Agriculture
crafts
SME