Welcome to the module on "Digital DIY derived technologies and tools" of the first "Introduction to DiDIY" course of the DiDIY Project!

A nice slogan to describe the real power of Digital DIY (DiDIY) is that you can use DiDIY to “make things that make other things” (possibly DiDIY ones, again). This module explains this property of DiDIY, showing how the fundamental technologies described in the previous module are already applied to create DiDIY products and services in extremely different fields.

Among the sensors described in the previous module are many that can monitor things like temperature, atmospheric humidity, air pressure, presence and levels of water. The countless accessories available for Arduino microcontroller boards include wireless transmitters and rugged cases. All these DiDIY tools and accessories can be combined to build relatively inexpensive weather stations, perfectly customised to the environment, in which they will be placed, and to the actual needs of their owners. Systems like these can be very useful for farmers or anybody else living in isolated environments under extreme weather conditions.
In other cases, they are built and used for fun, maybe to support other hobbies. A perfect example of such an application is the weather station shown in the picture below. It was built by an engineer at his favourite kite surfing spot, in order to know in real time, wherever he is, when a good moment to practice his hobby arises. 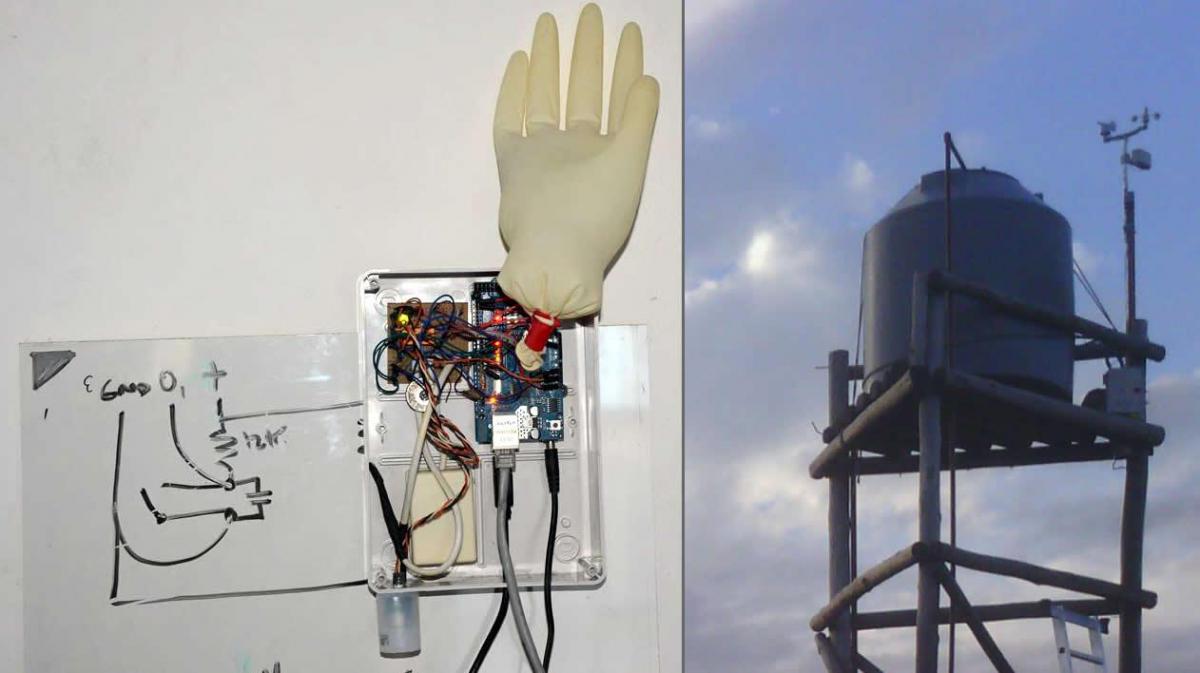 Another very popular class of DiDIY “environmental monitoring systems” includes anti-theft and home-automation products that can turn on lights, send messages, play music or execute a variety of other actions when somebody is moving inside the house.

Agriculture and cattle farming in particular are activities that are both heavily dependent on weather conditions and require continuous monitoring and intervention. DiDIY can contribute to relieve the stress of small, independent farmers, and make their activity more economically sustainable, in several ways.

First of all, the ability to monitor weather conditions and other events, like cattle movements, reduces some of the unpredictability and risks present in farming.

Secondly, automation of some operations can save farmers a lot of time, allowing them to tend to more land or cattle, or to have more spare time for other activities. Finally, DiDIY gives farmers something fundamental for the sustainability of their activity: the possibility to repair, maintain and customise their equipment as they want, in the ways that are best suited to their actual needs and working conditions. Example of these opportunities include:

Similar possibilities are also available to people living in cities. Hydroponics is a method of growing plants indoors, without soil, by keeping their roots in a mineral solution or in an inert medium, such as perlite or gravel. Small (even just one or two square meters) indoor hydroponic gardens require much less water than traditional ones and let plants grow without any additions. Inside those gardens, temperature, humidity, amount of nutrients (if any) added to the garden, and any other relevant parameter can be controlled automatically, via DiDIY systems like the Hyduino. A similar technique, shown in the picture below (from Flickr user Nicolás Boullosa), is aquaponics, which integrates a hydroponic environment with aquaculture, that is the process of cultivating fish in the same tank used for the hydroponic garden. 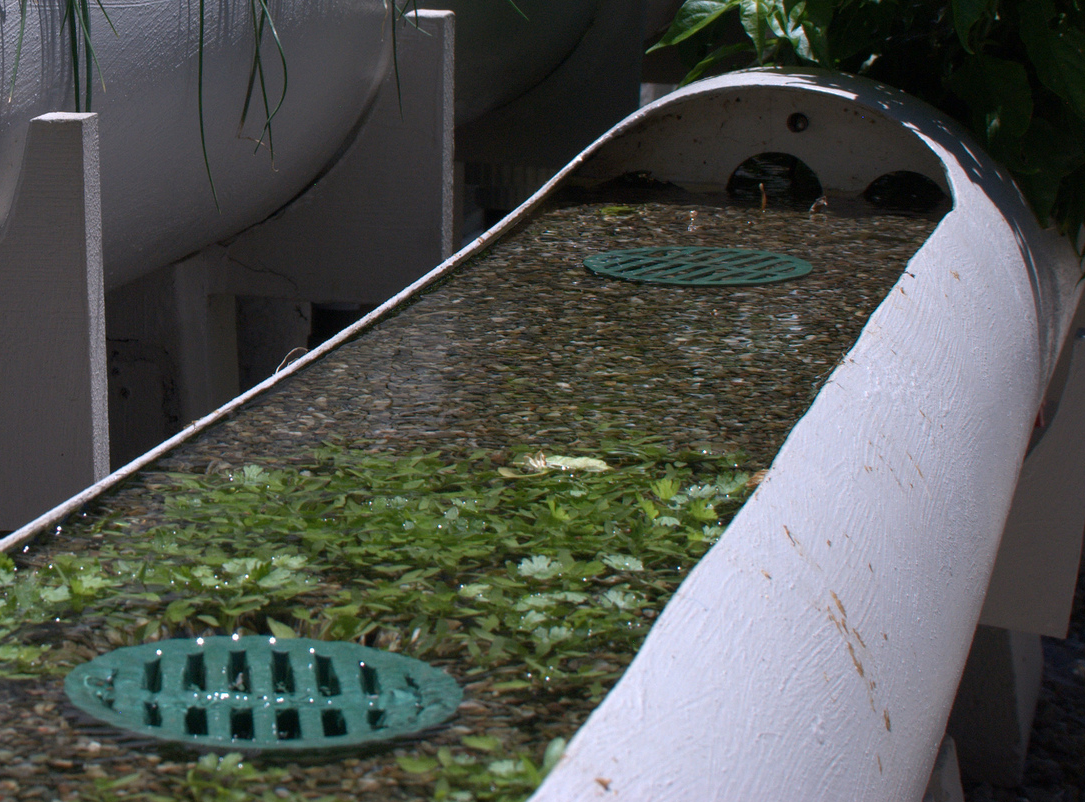 Mechanical knitting machines, that are machines that produce pullovers, hats and other garments using wool or other textile fibres, have been used in the textile industry since the late 19th century. Home versions of the same machines, operated manually, became (relatively) popular in Western countries during the last decades of the 20th century. Today, it is possible to upgrade those home machines with stepping motors and microcontrollers, thus making them work in a fully automatic way under control of a personal computer.

Alternatively, combining 3D printing and more traditional techniques, it is possible to build computer-controlled knitting machines from scratch. The instructions to these machines, that are the exact design of a sweater or other garment, can be entirely generated at the computer. The situation is exactly the same with jacquard looms. Designs for self-built looms, which can be controlled by a computer and thus work unattended, are already available online.

This family of DiDIY technologies is based on DIY machines like the “circular Knitic” shown in the picture (more details available here) and the OsLoom. 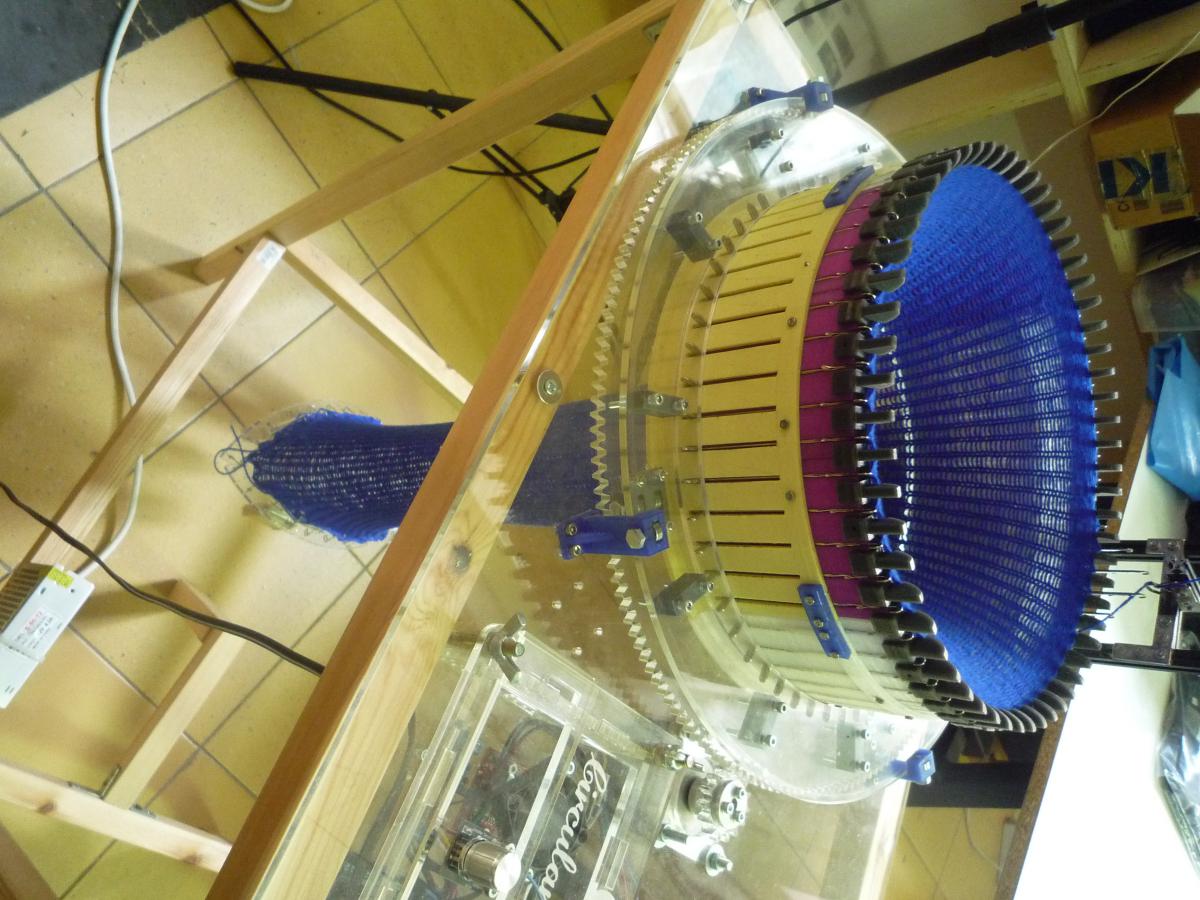 A common characteristic of most DiDIY activities is the fact that people, instead of using a traditional tool directly, with their own hands, connect it to a computer and then “order” that computer to use the tool on their behalf. This DiDIY way of working is applicable also to many artistic activities. We have already mentioned how 3D printing enables people to produce sculptures, who would never create them with their own hands. The same thing happens with drawing, where the tool the computer is told to control is a normal marker, as shown in the photograph below. A real world example of this practice, though limited to continuous line artwork because it cannot move the pen vertically, is the Drawbot. Even more interesting are the “vertical” versions of such bots. These are drawing machines that can draw on any vertical panel or directly onto a wall. An interesting example of this category is a plotter, which can easily be reconfigured to draw very big designs and can be controlled remotely with a smartphone. 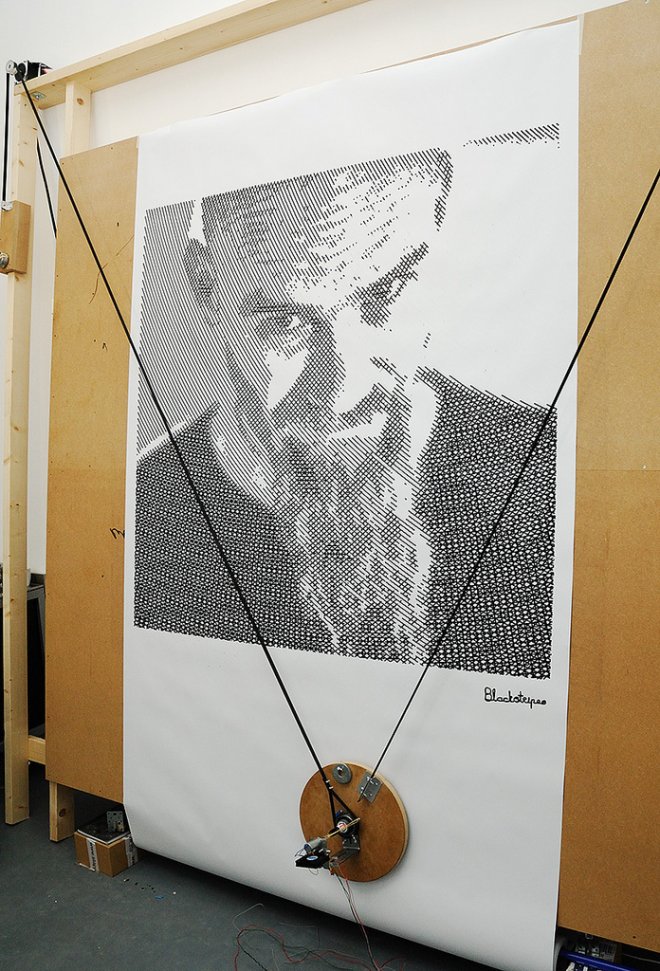 Microcontrollers like Arduino are not really powerful, but they are flexible enough to be used for the DiDIY-style production of something that has millions of fans: console games. Some of the existing projects are easy enough to be accessible even to beginner Arduino programmers. The “Gamebuino”, for example, is a retro portable game console project, whose goal is “to allow you to easily make your own games… and even more”: 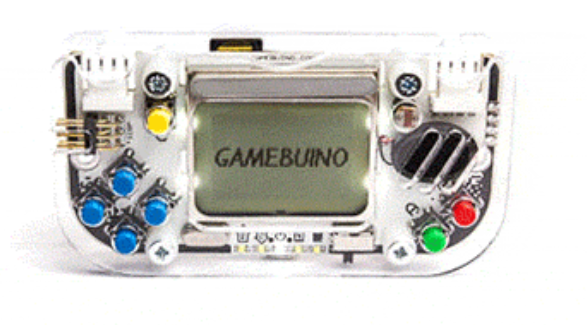 According to its developer, Gamebuino is also useful as an educational tool, since – while easy enough for beginners – it also allows for experimentation with different configurations to optimise the performance of the hardware.

DiDIY means that 3D printing to make objects of any conceivable shape, sensors to capture physical properties of other objects, and computers to analyse the resulting data are at our fingertips. When used together, these features of DiDIY create another opportunity, with potentially huge impacts: They make it possible, for people with the right competencies of course, to self-build medical devices and medical analysis systems. This is very close to saying that DiDIY enables, in ways and at scales never before possible, the self-building of healthcare services. As all the other things presented in this course, this is not theory, but something that is already happening in Europe and elsewhere.

In Spain, for example, the “Gynepunk” group, in partnership with other makers, has been working on designing, 3D-printing and using gynaecological equipment, as the tool shown in the picture: 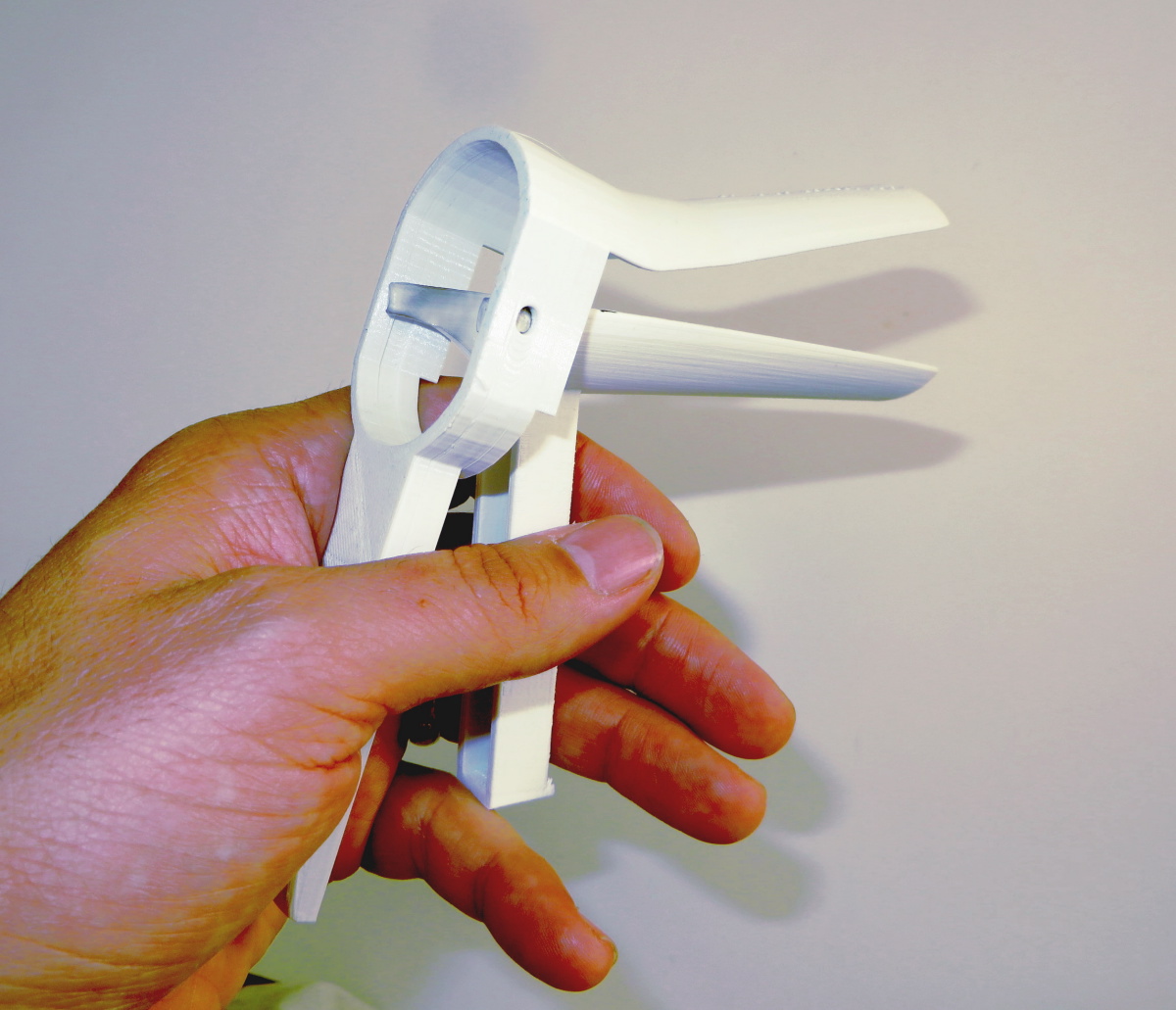